Why are Lithuanians crazy about kebabs?

Kebabs have taken over Lithuania – there’s hardly a village in the country without a kiosk offering a rotating spit of meat. Why, and how, did kebabs become so popular in the Baltic country?

Over time, the humble kebab morphed into a truly Lithuanian take on the classic dish. Kebabs that Lithuanians buy in fast food kiosks do not resemble traditional recipes, according to Vytaras Radzevičius, a culinary journalist.

Radzevičius joked that his Turkish barber doesn’t like to talk about the dish that Lithuanians call a kebab.

“He says that real kebabs could only be found in Istanbul. There are a few Turkish restaurants in Lithuania that also make traditional kebabs,” the journalist said.

According to Radzevičius, Lithuanians fell in love with Kebabs because this dish is quick to make, easy to eat, and has a tinge of exotic flavour. “Lithuanian people probably treat kebabs as a healthier version of fast food because it has vegetables,” he said.

However, Lithuanians use sauces that are far from the traditional ones.

“The cuisine adjusts to the local tastes. That is why [Lithuanian kebabs] are made with mayonnaise, ketchup, and other less traditional sauces,” said Radzevičius.

However, “a kebab should not be treated as a Turkish dish because it is popular in the Middle east, the Caucasus, and Central Asia. Every country in this region has its own variant of Kebab,” he told LRt.lt.

“I once read that Kebab originated in the Persian military, where soldiers used swords to grill meat. There could be a grain of truth in this story. Anyway, Kebab is popular all around the world and its recipe comes from the Ottoman and Persian Empires,” added Radzevičius.

Different countries use varying methods to prepare Kebabs, he said.

“Because the dish comes from Islamic countries, it is traditionally made with mutton. This recipe is believed to be the most delicious, but kebabs with chicken are also becoming more popular,” he said.

According to Radzevičius, kebab meat can be minced and grilled on a skewer or chopped. Most kebab kiosks in Lithuania use a spinning vertical skewer to prepare the meat, which is only used elsewhere “in the street food market.” 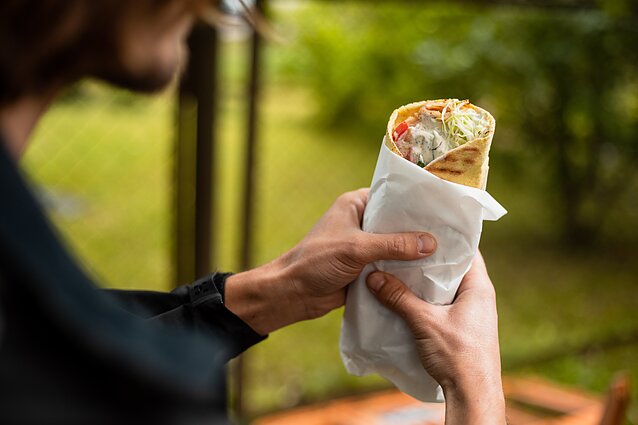 A kebab wrapped in lavash flatbread – the popular choice in Lithuania. / J. Stacevičius/LRT

Kebab is made of four main ingredients, including pita or lavash flatbread,, meat, vegetables, and a sauce. But eating kebabs too often could have adverse health effects and result in weight gain, according to dietitian Vaida Kurpienė.

“It is better to eat kebab wrapped in lavash because it has less white flour compared to a pita. In general, dishes made of ground flour should not be consumed too often because they have carbohydrates that are easily broken down to glucose,” Kurpienė explained.

“After some time, we start feeling hungry and crave fast food again. We enter a vicious cycle – the more we eat such food, the more we want it. If we do not burn the energy gained from it, we start gaining weight.”

It is crucial to pay attention to what type of sauce is being added, she said.

“Kebab is quite big, so a lot of sauce is being used to make it moist and easy to eat. If the sauce is made of natural yoghurt with salt and herbs, it is healthy. But if its base is made of mayonnaise, it is not,” Kurpienė said.

She noted that lavash or pita, supplemented with a fatty sauce, could have too many “empty calories” that provide energy but not the essential nutrients. If a person eats too much of such food, he or she could suffer from malnutrition leading to other health conditions, such as fatigue or headaches.

According to her, it is also hard to know if the meat used by the kebab kiosks is of good quality.

“Lithuanians usually use fat meat which has less protein. It is also likely that Kebab shops use food additives,” she said. “If we add all ingredients together, we see that kebabs contain a lot of simple carbohydrates that should be avoided.” 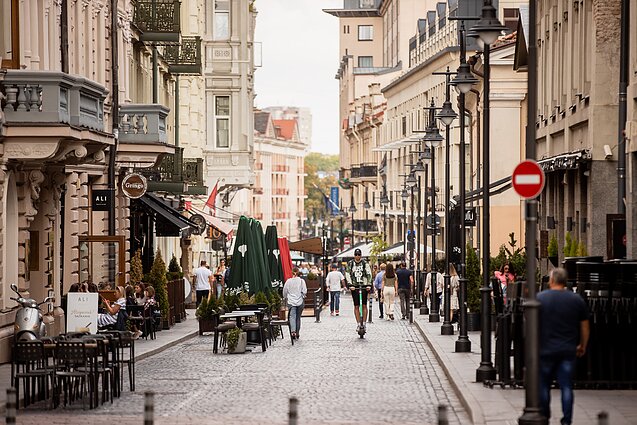 Eating at kebab shops involves risks, as it is often hard to predict the quality of ingredients used to make the dish. In 2019, the National Food and Veterinary Service in Lithuania received 34 complaints related to fast food shops, including kebab kiosks. Almost 60 percent of the complaints were found to be accurate.

Laura Ivanauskienė, a food inspector, told LRT.lt that most people complain about the dish quality, looks, and taste, unhygienic conditions, or food poisoning.

Many complaints also stress poor staff hygiene. They allegedly work without head covers, touch money or smoke and prepare food without having washed their hands.

Ivanauskaitė said that customers should be careful when choosing a kebab kiosk because eating at unhygienic places could lead to food poisoning and other health conditions.

“At a shop, cleanliness, staff hygiene, food looks, and smell should be evaluated,” the inspector said.

Christmas in Vilnius: Amazing Wherever You Think It Is

A new and innovative venue for Vilnius Film Festival 2021

Vilnius: Spaces that were previously closed to residents will open up